A seven-storey glass tower that opened this year on the outskirts of San Francisco looks from a distance like the headquarters of a Silicon Valley start-up. Rather, it is one of 34 car “vending machines” operated by Carvana, a company that promises to be the digital disrupter of used-vehicle dealerships stuck in a time warp.

The gleaming structures scattered across America are a clever form of branding. Although most Carvana customers buy on the company’s app and have the car delivered to their driveways, the vending machines serve to make the point that buying a used vehicle should be much easier: as easy as picking a chocolate bar.

Carvana’s pitch had attracted customers and investors alike. Last year the company sold 400,000 vehicles, twice as many as in 2019, as a shortage of semiconductors and other parts resulted in a paucity of new supply and sent the price of used cars skyrocketing. Its market capitalisation peaked at $50bn and executives likened the trajectory of its revenue growth and valuation to tech giants Amazon, Google and Facebook.

“Is [Carvana] a more efficient way to operate a car dealership? . . . The answer is ‘yes’ by a wide margin,” Clifford Sosin, whose CAS Investment Partners is the fourth-largest shareholder, said last year as Carvana’s stock price was soaring. “This is an immensely difficult business to replicate.”

But behind the glass boxes is a company that has more in common with a typical car dealership than it might at first appear, one that traces its origins to an Arizona rent-a-car franchise called Ugly Duckling and is controlled by a father-and-son team. Like others trying to turn a profit from selling used cars, it is under intense pressure as the US Federal Reserve raises interest rates and inflation pinches consumers. Used-car prices are now in retreat, making it harder to flip vehicles at a gain.

Carvana on Thursday reported retail car volumes fell by 8 per cent on year in the third quarter, the first annual sales decline in its history. Revenues also fell to $3.4bn, undershooting expectations, while net losses widened to more than $500mn.

The company blamed the fall on rising interest rates, which have made monthly payments for used-car loans increasingly unaffordable. Efforts to cut costs by reducing spending on advertising and inventory have turned off some shoppers. Carvana said it had roughly $4bn of remaining liquidity, the vast majority in the form of borrowing capacity rather than cash.

Shares of the company are down 95 per cent from their peak in mid-2021 while its debt trades at distressed levels. High-profile investors such as Tiger Global and D1 Capital Partners have dumped their stakes.

Carvana became a public company in 2017 after spinning off from a used-car chain named DriveTime. Carvana chief executive Ernest Garcia III is the son of DriveTime founder Ernest Garcia II. The elder Garcia controls 84 per cent of Carvana’s voting shares, according to a proxy filing.

Ernest Garcia II has a chequered history in business. In 1990 he pleaded guilty to bank fraud and received probation for his role in a sham financial transaction with Charles Keating, the Arizona property tycoon who was at the centre of a historic scandal in the US savings and loan industry.

Garcia II also acquired Ugly Duckling, which he would transform into DriveTime. Along the way he pioneered various consumer finance products, including packaging customer car loans into bonds.

Loan securitisation is now an important part of Carvana’s model.

Offering solid yields at a time of low interest rates, Carvana has been able to book large gains on the sale of its asset-backed securities to institutional investors. The sales have boosted its preferred measure of profitability, gross profit per unit, or vehicle sold.

The gains from selling loans along with other ancillary fees have typically accounted for more than half of Carvana’s gross profit per unit. “Every auto company is a finance company,” explained one investor in Carvana debt.

The financing business benefited from a nearly perfect confluence of events in 2021. Demand for vehicles was strong and car prices were rising, enabling Carvana to create large securitisation packages. Investors sought out those securities for their yields at a time of low interest rates, creating large gains on sales when loans were sold.

“Lenders do the most work: they underwrite the loan; they credit score; they price; they verify; in many cases, service the loan . . . And as a result of doing the most work, lenders also earn the most profits on a given loan,” chief financial officer Mark Jenkins said in 2018, explaining why Carvana’s credit business could be so lucrative.

Sceptics, who include the short seller Jim Chanos, wonder how the operations will fare as these conditions change. Carvana said its gross profit per unit from selling loans and other fees was $1,921 in the third quarter.

Carvana’s core retail business has been its own high-wire act. Few other consumer industries have been more slowly disrupted by digital upstarts than selling cars. Dealerships are regulated by states where incumbents have political clout to fight off direct-to-consumer challenges from the likes of Tesla or Carvana.

About 40mn used cars are sold in the US each year at a total value approaching $1tn. Roughly half are private market transactions, with dealerships handling most of the rest. While ecommerce accounts for almost a fifth of US retail sales, less than 2 per cent of used-car sales are online.

Carvana’s operations are technically challenging. It maintains about 20 inspection and reconditioning centres spread across America where newly acquired inventory is polished into shape. Online shopping allows the Arizona-based company to avoid costly showrooms and salespeople.

But Carvana bears the cost of picking up and delivering cars and has spent heavily on advertising to build its brand. Even on its preferred measure of operating profit, direct and overhead costs combined typically exceed revenue. “We need to see either further [increases in car sales] or an improvement in per-unit profitability to sustainably see positive cash flow,” said Daniel Imbro, a stock analyst at Stephens.

Carvana needed to raise cash this spring to buy car auction business Adesa in a $2.2bn deal. Adesa’s physical locations would expand its footprint of reconditioning centres, boosting annual sales capacity to between 2mn and 3mn vehicles, the company said.

But the timing proved tricky as Wall Street was souring on growth companies just as it sought to finance the deal. Carvana sold more than $3bn of C-rated junk bonds to investors such as Apollo Global Management at a relatively high yield of greater than 10 per cent. It also sold $1.3bn in stock, with a third purchased by the Garcias at $80 per share. Carvana’s shares dropped 39 per cent to $8.76 on Friday.

Carvana has pivoted from breakneck growth to preserving cash. It has laid off 2,500 workers, or 12 per cent of its labour force. “I think undoubtedly, the swing in strategy from grow as fast as you can to get profitable as fast as you can is a big change,” Garcia III said on a call with investors after Thursday’s results.

The coronavirus pandemic led to a boom in sales, but Carvana’s actions at the outset of the crisis have brought scrutiny of its corporate governance.

In April 2020, it sold $600mn of stock to a select group of investors and insiders. Buyers included billionaire co-founder of Guggenheim Partners, Mark Walter, whose affiliates had been longtime investors of Carvana debt and equity. The Garcias bought $50mn in shares.

A group of shareholders sued over the stock sale in 2021, arguing that Carvana had sufficient resources at the outset of the pandemic and that its board lacked enough independent directors to scrutinise a transaction that provided a windfall to insiders when the stock skyrocketed. Garcia II went on to sell more than $1bn in Carvana shares in 2020 and 2021, according to securities filings referenced in the lawsuit.

Earlier this year, a Delaware judge declined to dismiss the lawsuit. The elder Garcia, the company’s largest individual shareholder, has never had a formal role at Carvana. But according to the judge’s ruling he “participated behind the scenes in the planning and execution” of the share sale.

Carvana has also paid millions of fees to DriveTime and other affiliates of the Garcias. The company told the Financial Times those payments are for services that help Carvana grow and remain modest. “Payments from Carvana to related parties are insignificant in the context of the size of our overall business,” a spokesperson said.

On Thursday Carvana’s chief executive sought to reassure investors. “While progress is rarely linear, we remain on the path to becoming the largest and most profitable auto retailer,” the younger Garcia said in a statement.

The company’s believers insist that the business model will be vindicated. “If they can stay solvent for next year, Carvana will be the future of car buying,” said a rival car executive. 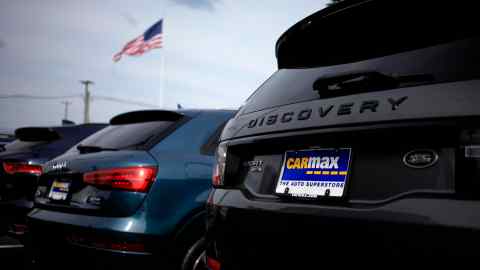 However, Carvana, was reporting cash outflows even when its stock price was peaking last year. Used-car prices are now falling, with an index compiled by auction company Manheim down 7 per cent year on year.

“Carvana has not generated any positive cash flow since first reporting financials in 2014 — over eight years ago,” said Ben Axler, founder of Spruce Point Capital Management, a hedge fund that has been a longtime critic and short-seller of the company.